On August 17th 2017 I set out on an attempt to kayak around Ireland as fast as possible and in doing so break the current 23 day speed record. After paddling 1100km of the 1500km total in just over 17 days I was faced with the tough decision to stop due to worsening weather on the West coast. While the expeditions main aim was not successful, I had one of the most amazing experiences of my life. The kindness and support of strangers, friends and acquaintances was simply incredible. From having breakfast with a 91 year old lady, to sleeping in an RNLI station, the hospitality I received around the coast of Ireland was inspiring. Ireland really is the land of a thousand welcomes. I also managed to raise €1900 for Crumlins Children's Hospital due to the generosity of everyone online.

After a good start covering 165km from Mayo to Donegal in the first two days the weather set against me for the remainder of the expedition. On day three I had to stay off the water as a 3 metre swell and gale force winds pounded Malin Head the most Northerly point of Ireland. The next day I was back covering big distances, 94km to be exact and I had the first taste of the headwinds that would keep me company the whole way down the East coast. Along this coast it is necessary to "work" the tides so early mornings and late nights are a must to maximize any advantage that can be gained.  This meant starting out in the dark at 4am and usually finishing around dark that evening.

After only 9 days (8 paddling) I had reached Bray south of Dublin, averaging 70km I was well on target, even ahead of the record.
The headwind continued around the south East coast and on day 12 I had a very hard afternoon from Kilmore Quay into a force 5/6- forcing me to land in Fethard on Sea after 3 hours and only 17km. The next day I was back to full days with 70km plus, all the way to Cape Clear Island on the South West corner.
I had finally got a break in the weather upon reaching Ardmore two days before arriving on Cape Clear.  I was making excellent progress. After Cape Clear I made the committing 40km crossing around Mizen Head and on to Dursey Sound. This was one of the best days I had on the water. Zero wind , glorious sunshine all day, miles off shore and I saw my first ever Sun fish. 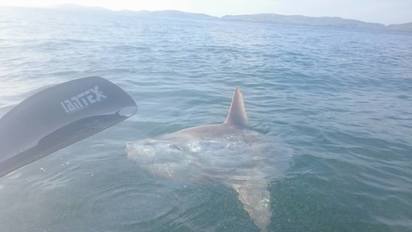 ​The next morning brought as forecast very strong southerly winds. I was on the water at first light to run ahead of the worst of the coming weather. By the time I reached Puffin Island, just south of Valentia,  the sea was hissing spray and the wind was gusting force 8. I made for the safe harbour of Knights town after 48km and a serious battle into a side wind for over an hour.
I got a look at the forecast for the following week and it was not inspiring. 3 metre plus swells were coming and strong Westerly winds too. On day 18 I made the crossing to Dingle and considered my options for continuing with the forecasted conditions and the most committing coastline yet to paddle.
The voice in my head and gut said no and I knew I was going to have to pull the plug and abandon the expedition. The forecast had held and looked impenetrable for a least 10 days, far too long for me to sit and wait. Once you stop paddling such huge distances every day your body has to go into recovery and its is very difficult to go again. Also mentally it is hard to just stop and sit waiting for a window to come. I know the current record holder pulled an attempt in 2014 after 2 days because of the weather. So it is always something you have to prepare for. It turned out to be 14 days before such a window did appear and in hindsight I am happy I decided to stop when I did. It is, of course,  disappointing not to complete the journey but that is always the risk with kayak expeditions and something I accepted before I set out. 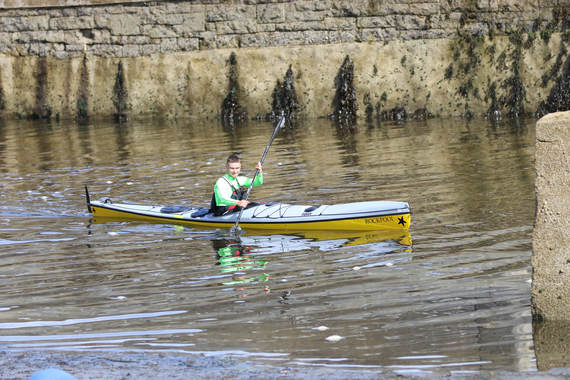 ​Physically I felt great and I definitely had 5-6 more days of paddling in the bank if the opportunity was there to keep going. After getting home I took 6 days rest and got back to training and racing immediately with the Liffey Descent just two weeks after the last day of the expedition.
I am really happy with my physical performance and more so with my mental  performance. Over the whole 1100kms paddled I never once had any dark moments where I questioned what I was doing. In fact I noticed myself slipping into the coveted "flow" state for hours each day and just eating up the miles even when I was crawling along at 6 kmph into a headwind. I put this down to a number of factors from good nutrition to  psychology tricks.
Like every big race, event or trip I have learned a lot from this expedition that will stand to me for future adventures.
​As the saying goes " You don't lose, you learn".

I will be taking an "alpinist" approach to this expedition. Travelling light and (hopefully!) fast. I am grateful to be supported by some of the best companies in the kayaking and outdoor industry. It is essential that all equipment is efficient, lightweight and tough.  There is nothing like an expedition environment to push equipment to the limit and it is important to have confidence in your gear. 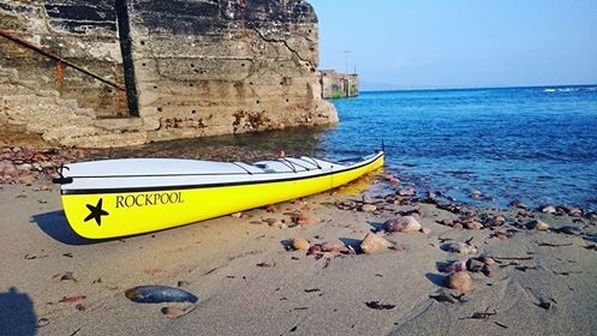 Kayak - Rockpool Taran 18
I will be paddling a Taran 18 expedition sea kayak. Premier lay-up in Carbon Kevlar. The Taran is well proven expedition kayak and the kayak I used in 2016 to kayak around Vancouver Island.